That which is for you will not pass you by. 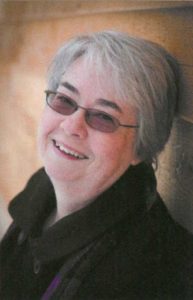 While this site showcases the four suspense thrillers that I’ve written, it also highlights my passion for wildlife photography.

My blogs are an eclectic mixture of advice, humour and random thoughts. 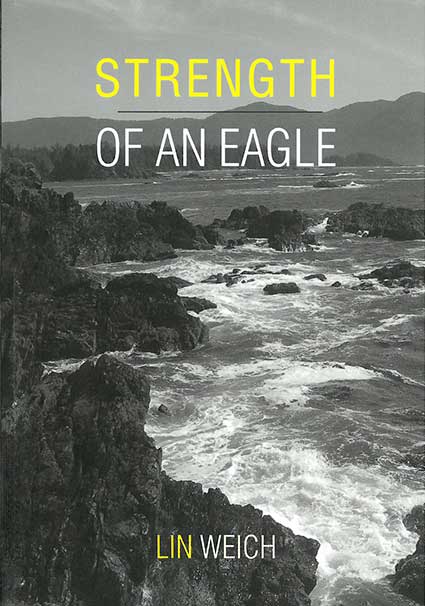 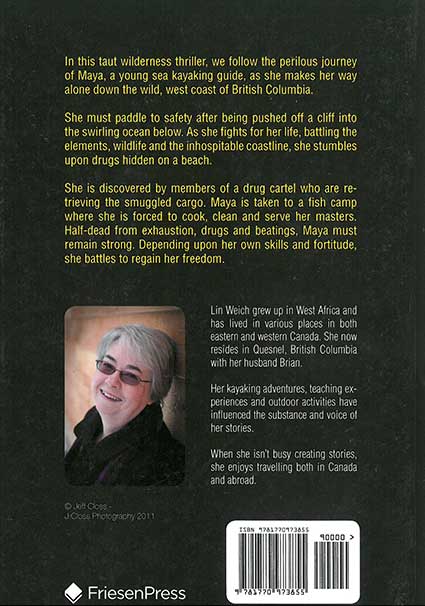 Strength of An Eagle

Author’s notes: Strength of an Eagle was the first suspense novel that I created. Many of my readers are enthralled by the grit and determination of the principal character, Maya.

It was inspired by the Highway of Tears tragedies and the drug problems plaguing Northern British Columbia, Canada; this novel depicts a young kayaker depending upon her courage and skills to overcome the inhospitable west coast environment, capture by smugglers and the grasp of a serial killer.

In this taut wilderness thriller, we follow the perilous journey of Maya, a young sea kayaking guide, as she makes her way alone down the wild, west coast of British Columbia

She must paddle to safety after being pushed off a cliff into the swirling ocean below. As she fights for her life, battling the elements, wildlife and the inhospitable coastline, she stumbles upon drugs hidden on a beach.

She is discovered by members of a drug cartel who are retrieving the smuggled cargo. Maya is taken to a fish camp where she is forced to cook, clean and serve her masters. Half-dead from exhaustion, drugs and beatings, Maya must remain strong. Depending upon her own skills and fortitude, she battles to regain her freedom.

Random Excerpts from Strength of an Eagle

Maya anxiously scanned the cliff’s rugged silhouette outlined against the sky. She thought she saw one, maybe two heads peering over, then nothing. She couldn’t be sure. Carefully inching over towards a thicker mass of kelp, she bobbed in the wave action. Her clumsy, water sandals dragged at her feet, but she couldn’t risk kicking the Tevas off, as she might need them later. The kelp churned in the surf. Salty water splashed over her, stinging her eyes. Cold water numbed her hands and feet causing her breath to come in short, hard gasps. A band of hot searing pain wrapped itself around her temples

Everyone crossed over the deck and stood leaning over the railing. Hundreds of moon jellies were floating on the current past the boat. The transparent white globes undulated as they glided past, their internal organs glowing eerily as their mantles pulsed. A steady stream of the delicate creatures passed silently by; dancing to unheard music in the moonlight.

The kayakers slid into the silent fog and discovered it was eerie paddling on the ocean’s smooth, shrouded surface. A splash sounded from the left, giving everyone a start. Laughter erupted as a curious seal poked his head up to see what had disturbed his peaceful bay. Fog clung damply to the silent paddlers as they made their way cautiously into a narrow channel.

After Sarah had gone to sleep for the night, she and John locked the farmhouse door; crossed the yard and entered the shop. Switching on the fierce overhead lights, Barbara steeled herself for what she might see. True to his word, there was guts and blood everywhere. It was a testament to his depravity. The poor girl lay face down on the cold concrete floor. Her arms were bound behind her back and a crude gag was held in place by electrical tape. John had taken his hunting knife and had carved his victim. Pools of sticky rust-coloured blood were everywhere.

“Christ John, what did you do?” 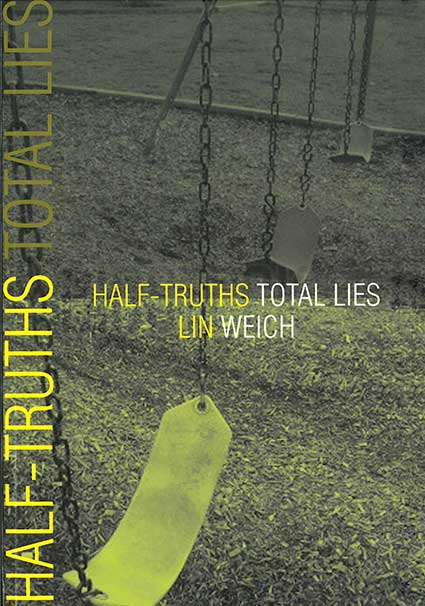 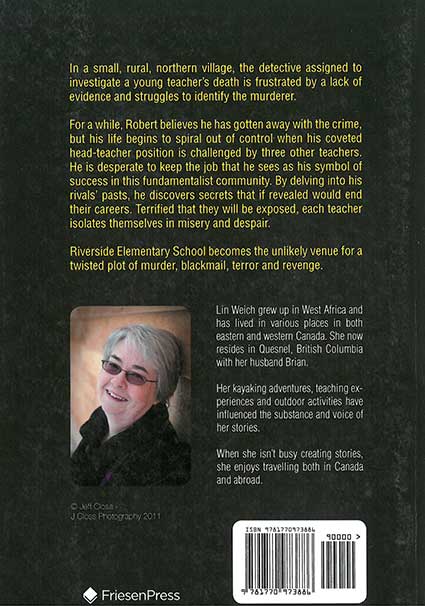 Author’s notes: I was fortunate enough to spend more than thirty years teaching in rural schools. Many people are drawn to the peace, quiet and anonymity afforded by rural areas.

In this fictional suspense thriller, the reader is invited to explore the mind of a murderer as he tries to justify blackmailing and terrorizing an accused child molester, an alcoholic gambler and a homosexual who teach in an isolated, religious, Northern community.

In a small, rural, northern village, the detective assigned to investigate a young teacher’s death is frustrated by a lack of evidence and struggles to identify the murderer.

For a while, Robert believes he has gotten away with the crime, but his life begins to spiral out of control when his coveted head-teacher position is challenged by three other teachers. He is desperate to keep the job that he sees as his symbol of success in this fundamentalist community. By delving into his rivals’ pasts, he discovers secrets that if revealed might end their careers. Terrified that they will be exposed, each teacher isolates themselves in misery and despair. 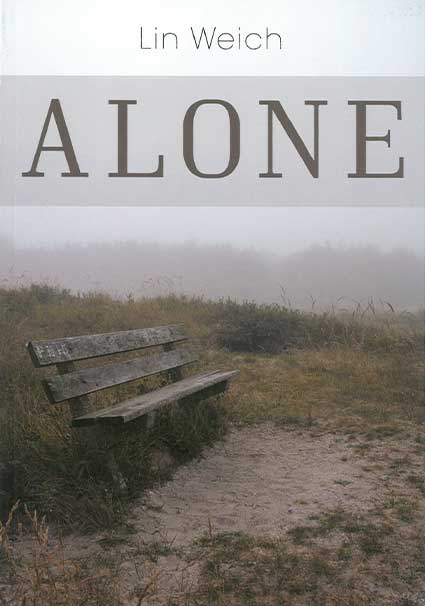 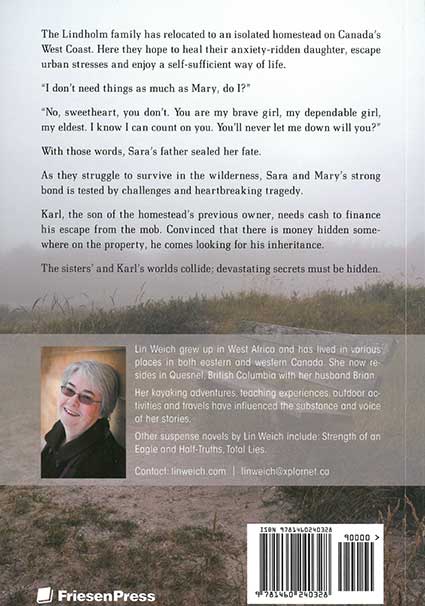 Author’s notes: This novel is quite psychological and needed a lot of research into the effects of trauma, isolation and self-sufficiency. It was challenging to write and remains one of my favourites.

Desperate to escape a cruel urban existence, a close-knit family attempts to become self-sufficient on an isolated homestead on Canada’s West Coast. Challenges, tragedies and an unwelcome outsider threaten the family’s future. Can the strong bond between the sisters, Mary and Sara, survive the harsh realities of their wilderness life?

1. Karl nodded. “My first time in one of these. You fly these puppies much?”

Fred laughed. “No worries. I’ve been flying Beavers most of my life. You’re in good hands.”

With the door still open, the pilot manipulated the controls on the dash, starting the sequence for takeoff.

The pilot coaxed the reluctant engine. The machine began tick- tick- splutter-coughing into rhythm. Puffs of blue, shot from the exhaust, permeated the cabin with a sickening stench. He leaned out, closed the door and began cutting through the waves towards the pass.

Karl’s hand tightened reflexively on the edge of his seat as Fred eased the control column back towards his lap and pushed open the throttle.
The plane picked up speed. As spray rose from the edges of the floats, the skies opened up. Rain sheeted the windscreen. Fred peered myopically through the window.

Karl closed his eyes willing the shuddering machine up into the air. The floats skittered over the white caps. He felt the Beaver lift and lurch vibrating as it rose into the sky. Then the whole plane rattled as Fred banked to the right.

Karl grabbed at the edge of his seat again as his whole body slid towards the ocean. His eyes widening in terror, as he pictured himself skidding off his perch and tumbling into the sea. Held in by an impossibly narrow seat belt, he clenched his butt cheeks trying to find purchase on the slippery leather seat. Instinctively, he let out a yelp as vertigo took over forcing him to close his eyes against the vision of his impending doom.

2. In an instant, the decision was taken out of her hands. As the next wave crashed over their bow, both girls were thrown out into the churning sea.
Shock turned to panic as their bodies were dragged further and further into the frigid water. Sara, blinded by the stinging salt water, reached out instinctively towards her younger sister. Forcing her eyes open, she caught sight of Mary inches away.

Her mouth was open as if she were singing, her eyes stark with terror. Mary grabbed Sara and flailed with her sneaker burdened feet. She fought to bring them both to the surface.

Horror struck; they watched the runabout disappear beneath the waves. 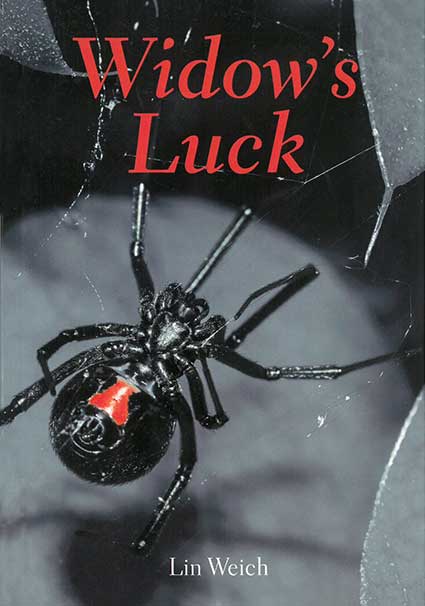 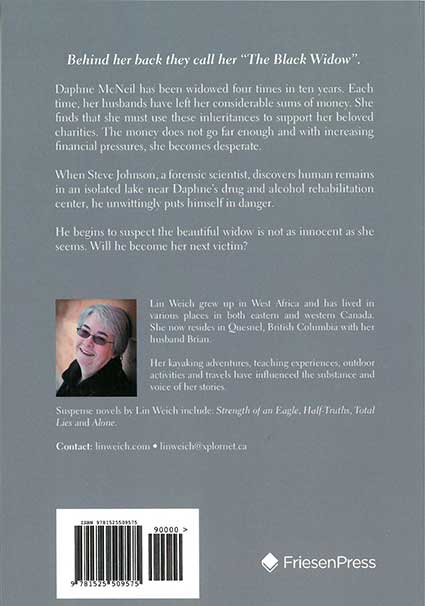 Author’s notes: My inspirations for this novel came from having spent my early childhood in Nigeria, my travels in the wilderness of the Chilko Lake area of British Columbia, Canada, and my frequent visits to Southern Africa. Couple these fascinating and very different environments with the horrific scams that people get caught up in and a desperation for money and you have the seeds for this suspense thriller.

Behind her back they call her the “The Black Widow”.

Daphne McNeil has been widowed four times in ten years. Each time, her husbands have left her considerable sums of money. She finds she must use these inheritances to support her beloved charities. The money does not go far enough and with increasing financial pressures, she becomes desperate.

When Steve Johnson, a forensic scientist, discovers human remains in an isolated lake near Daphne’s drug and alcohol rehabilitation center, he unwittingly puts himself in danger.

He begins to suspect the beautiful widow is not as innocent as she seems. Will he become her next victim?

1. He stood up to his knees in fetid muskeg, his breath coming in jagged gulps. Adrenaline pumping through his exhausted body as he slid his hand into the cavity under the edge of a crumbling bank. Sweeping his fingers around the dark, narrow space, he struck a solid, cold, hard object. He tugged and pulled at the plastic container, easing it out of its hiding place.

Success. The rush from the find made the hours of trekking through this swampy scrubland worthwhile. He forgot the mosquitos and blackflies biting every inch of exposed flesh; forgot the chill seeping up his legs; forgot the numbness in his toes from his waterlogged hiking boots. He’d found this geocache using only a compass and a topographical map. He had honoured the memory of his dad and did it old school.

2. Samir gave in and walked beside her for the rest of the tour. Then he escorted her to a dock on the Wawinma River to catch a sunset cruise. After inspecting the riverboat and speaking with the captain, he settled in the shade on the riverbank to await her return.

Daphne laughed and chatted with the other passengers, enjoying their camaraderie as the riverboat slowly made its way along the shoreline. Occasionally, they spotted crocodiles lurking near the banks, and saw many species of birds, including huge storks and egrets. She even glimpsed a large bull elephant emerging from the jungle in its quest for water.

The elephant sighting was amazing. The creature paused at the edge of the tree line, fanned its ears, and trumpeted. Then the giant beast meandered down the trail to the water’s edge. The passengers found themselves holding their collective breath as the boat eased past the magnificent animal.

“Ladies and gentlemen, we are truly fortunate to see this wonderful elephant. He is often seen only at the edge of the jungle. Rarely does he approach the river at this time of the evening. Too many boats.” The captain seemed as pleased as they were. “Now, come refresh your drinks. We will begin to serve dinner. Please take your seats.”